20 Of The Funniest Text Message Conversations 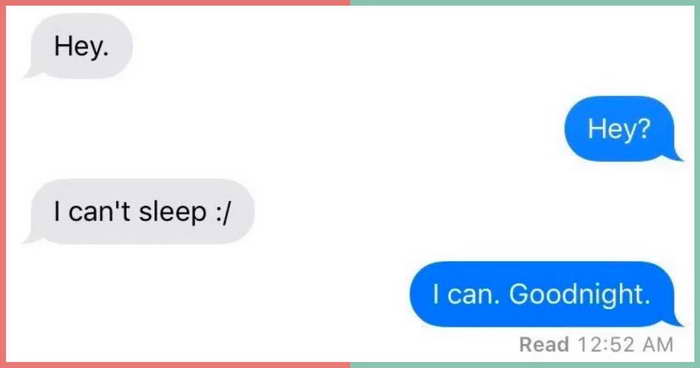 In today’s world, most of the individuals have conversations through the medium of text messages. But sometimes, these text messages tend to be very funny or hilarious when they are being sent to the wrong person at the wrong time. Sometimes individuals tend to text others while they are drunk or they send the wrong text to a parent or some senior person. This is what results in certain funny or hilarious conversations.

Given below is a list of certain text messages which are very much hilarious as well as funny:

1. The girl here changed the ‘hi’ to ‘nugget’ in her mother’s phone due to which her mother’s ‘hi’ read as ‘nugget’ when she texted her daughter. 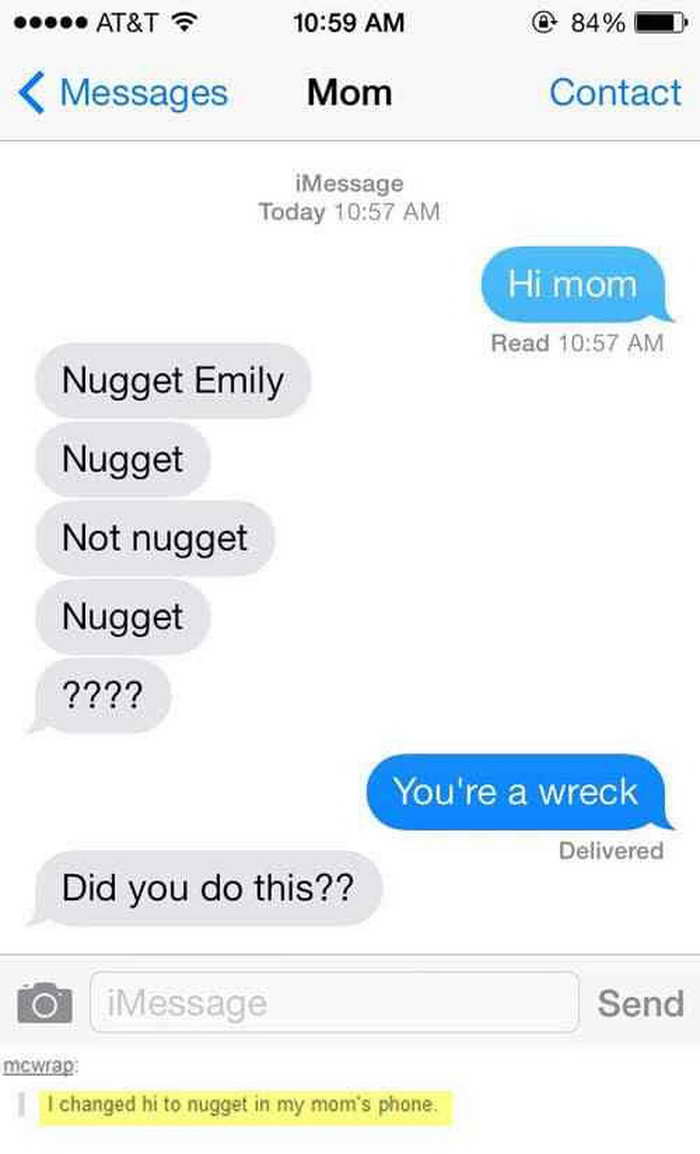 2. In this conversation, it is very clear that one of the individuals is not in a mood to sleep while the other is really feeling sleepy which has ultimately made their conversation hilarious. 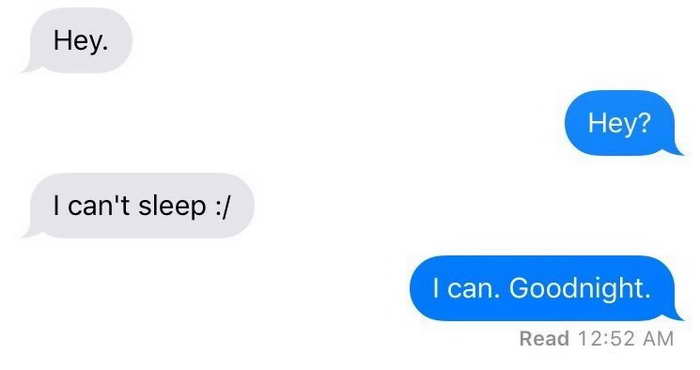 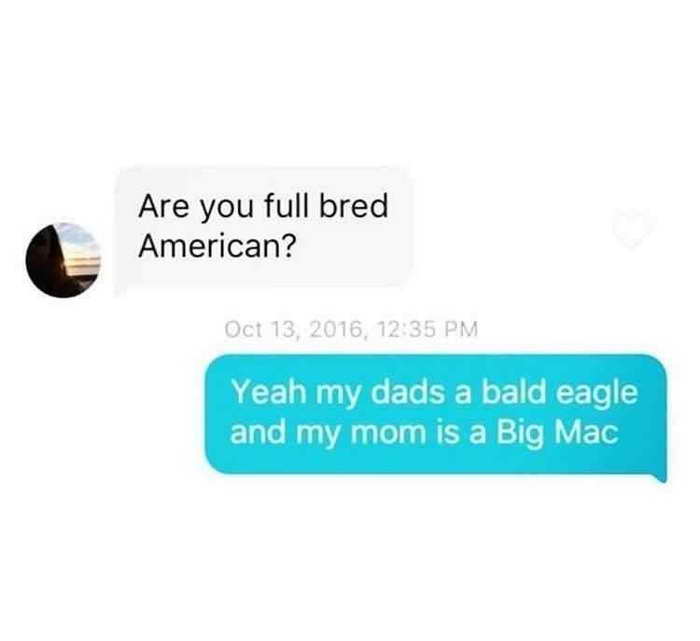 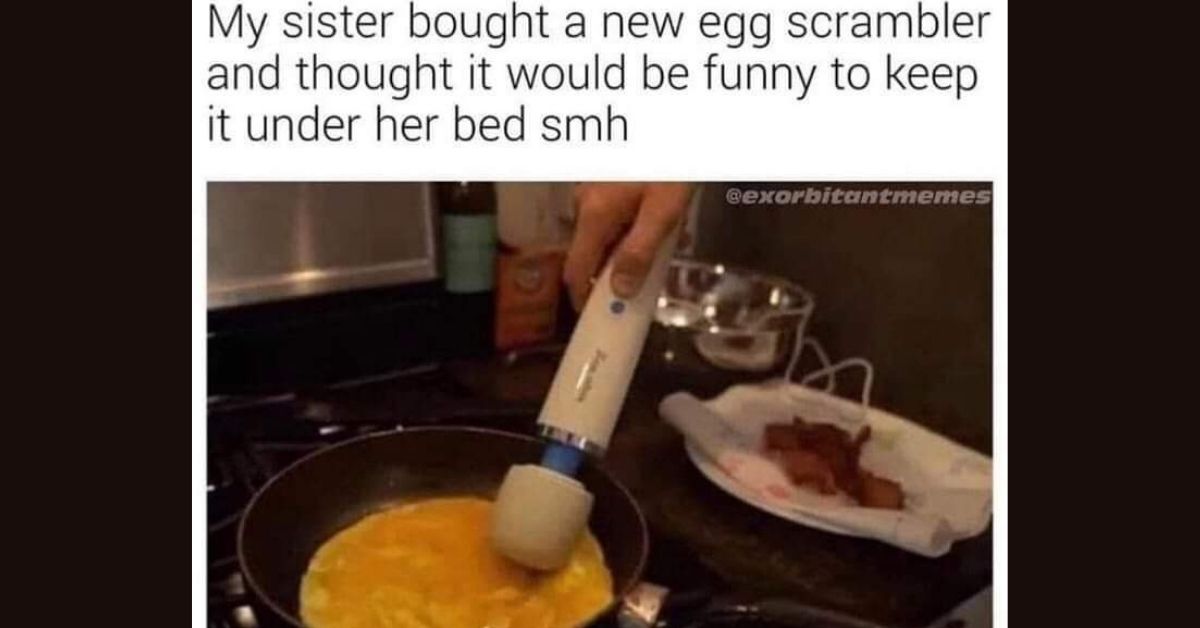 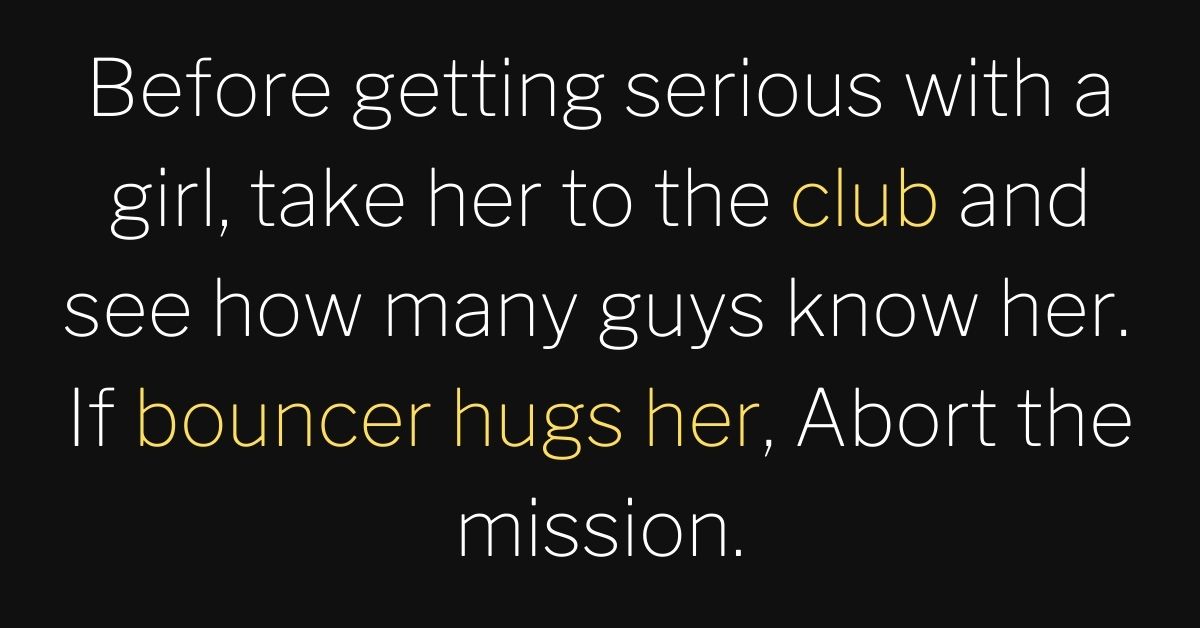 4. This is one of the most epic replies ever when one individual asks for some space in life; the other turns it into a funny text message by giving space between the words. 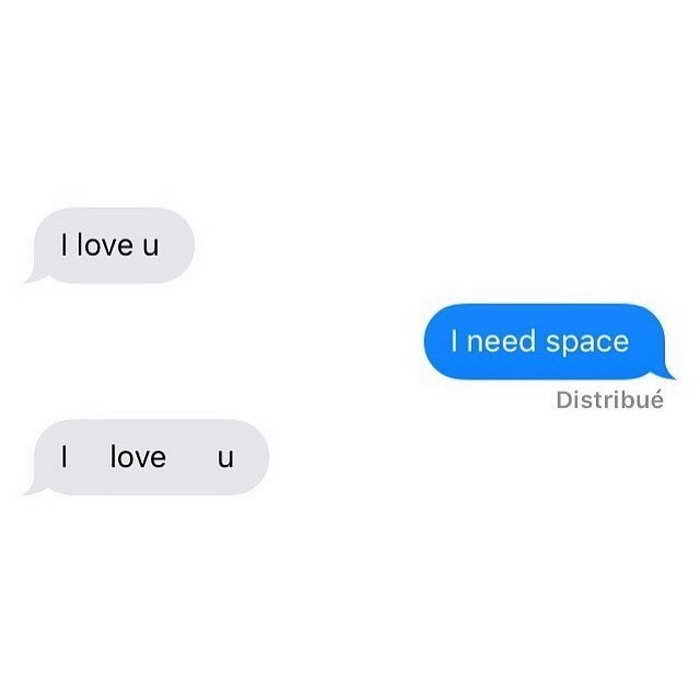 5. In this conversation, the individual who is reading the text is actually confused as to which word has replaced the word ‘cat.’ 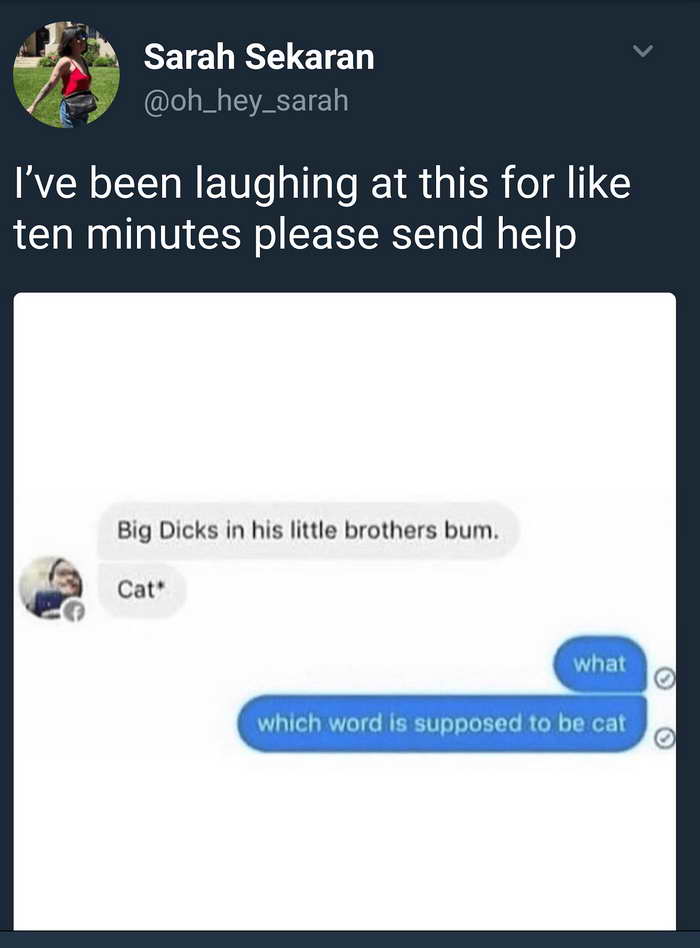 6. In this conversation, the anger of the individual sending the messages is quite clear through his or her messages that he or she wants more apologies from the side of the other individual. 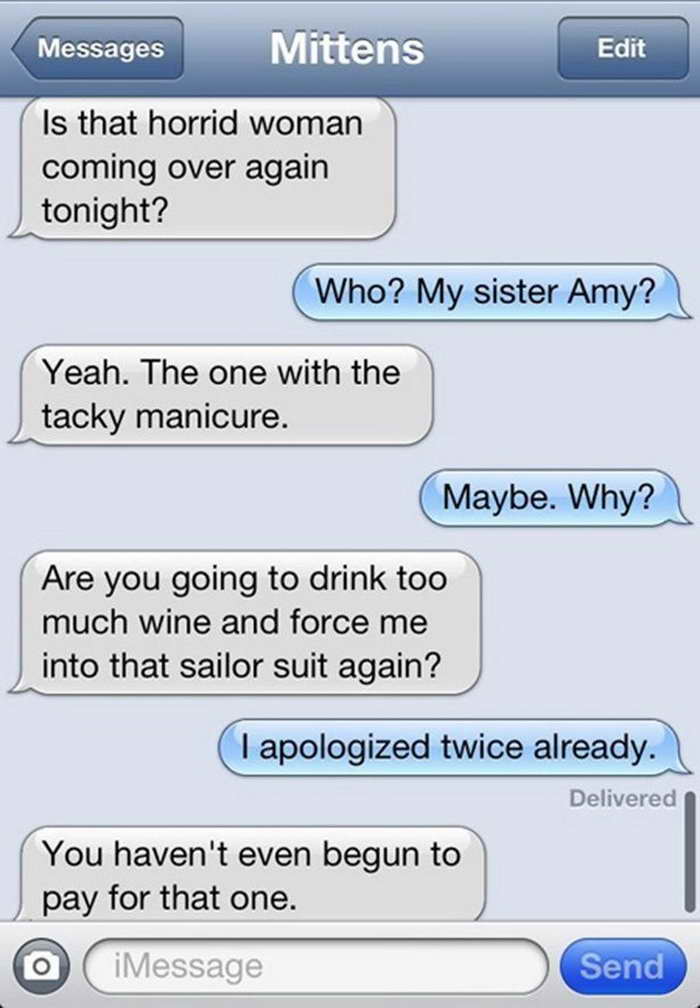 7. This is one of the funniest ways to make an individual realize his responsibilities by making him realize his mistake immediately. 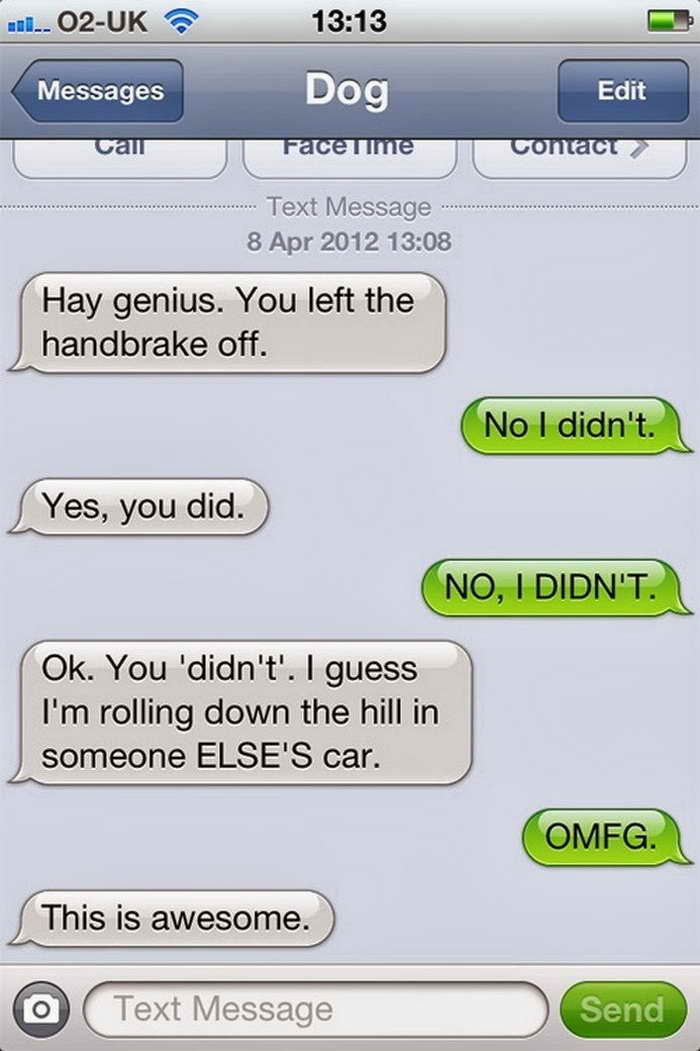 8. This hilarious conversation on muffins is worth looking out for as such kinds of conversations mostly happen between friends who simply love gorging on each other’s food. 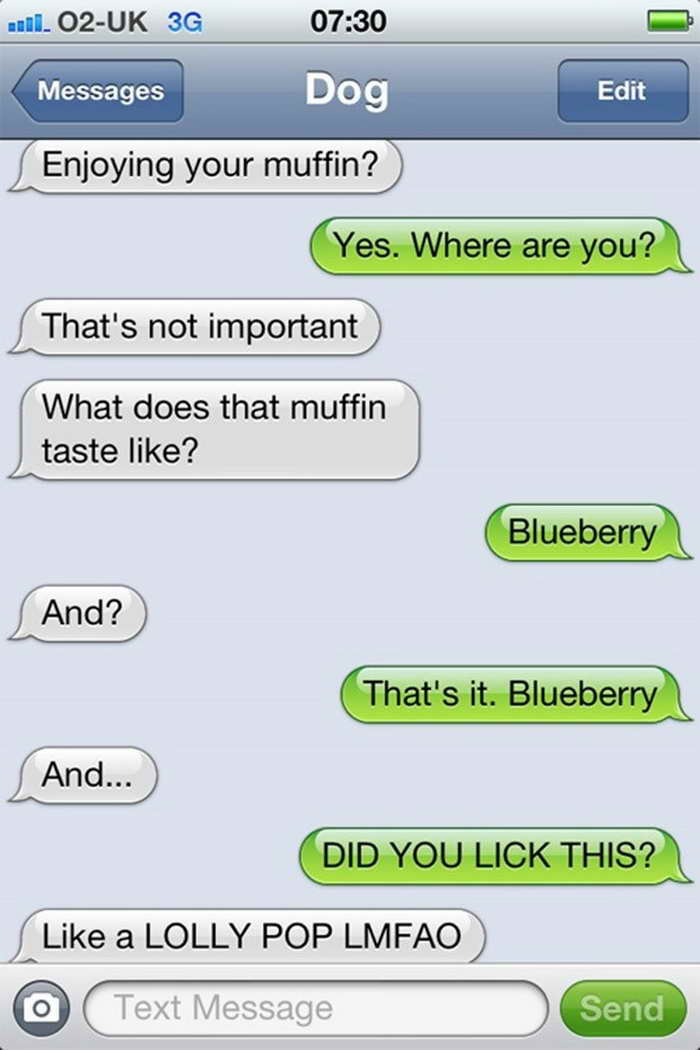 9. One of the individuals in this conversation is trying to be at the safe side by making the other realize about a mistake that was committed unknowingly. 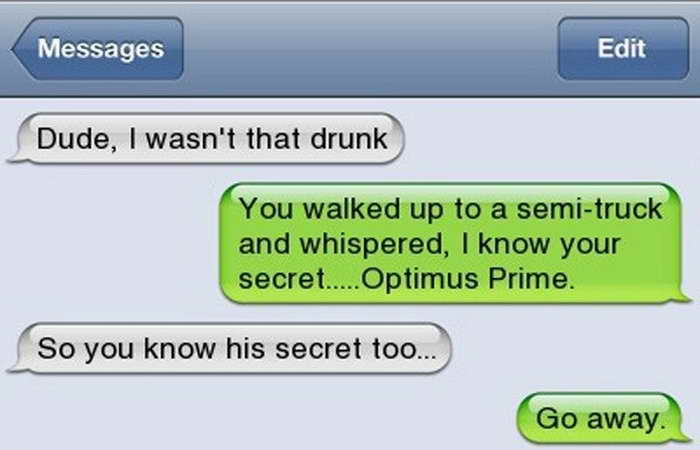 10. In this conversation, it is pretty clear that the other individual is in no mood to talk about anything other than cereals. 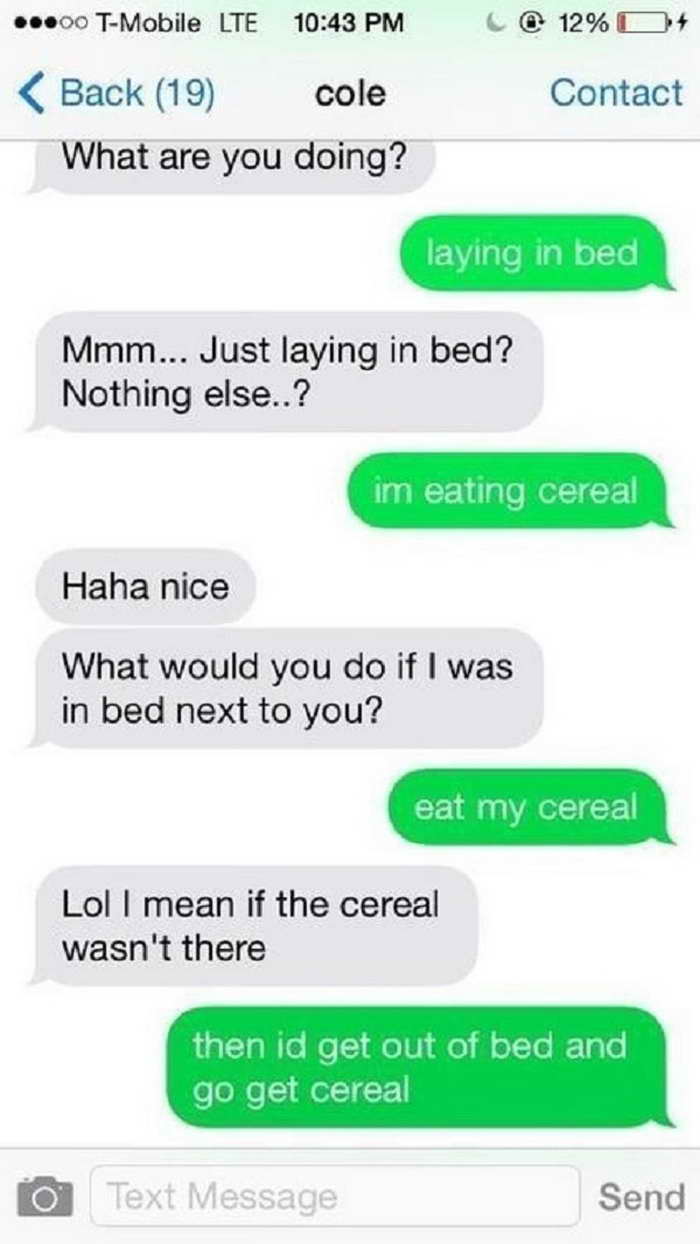 11. Sometimes people who are drunk do act funny, and this conversation is the proof that such incidents do happen at regular intervals. 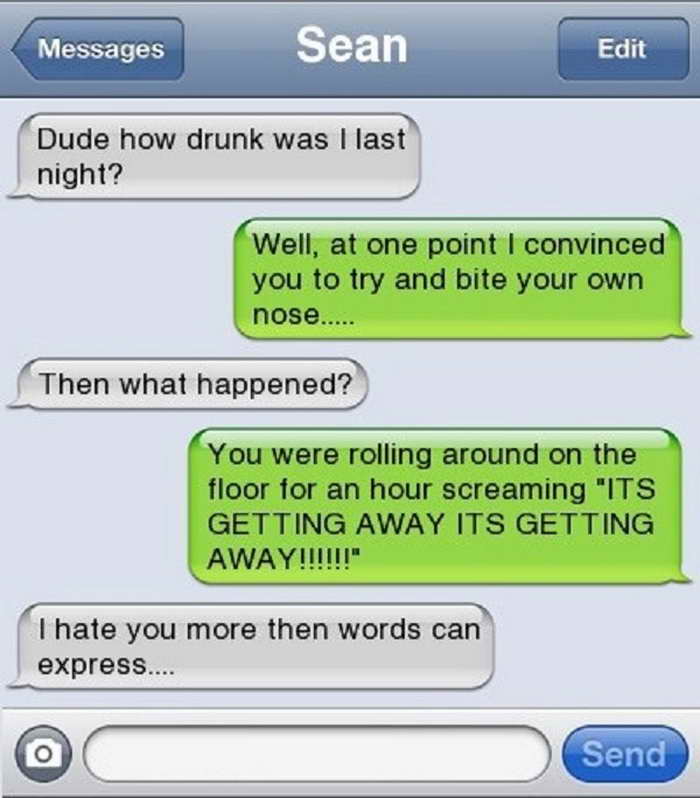 12. The two individuals in this conversation are really pulling out their frustrations on each other through the hilarious text messages. 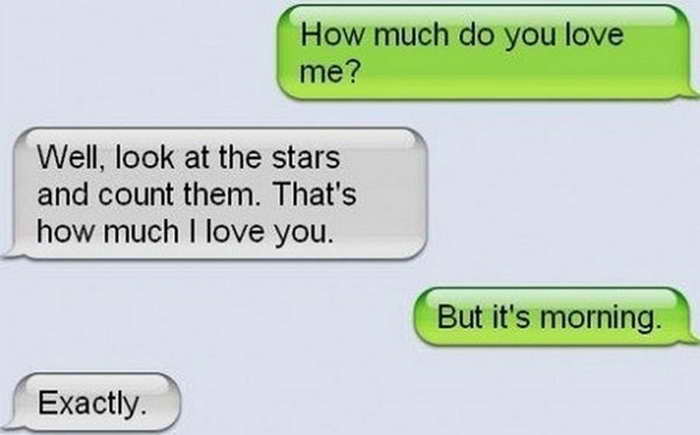 13. This is a kind of conversation that generally happens between students. Here, while one student is giving a ridiculous excuse for not going to class, the other is making her plan a disaster by throwing off sarcastic comments on her. 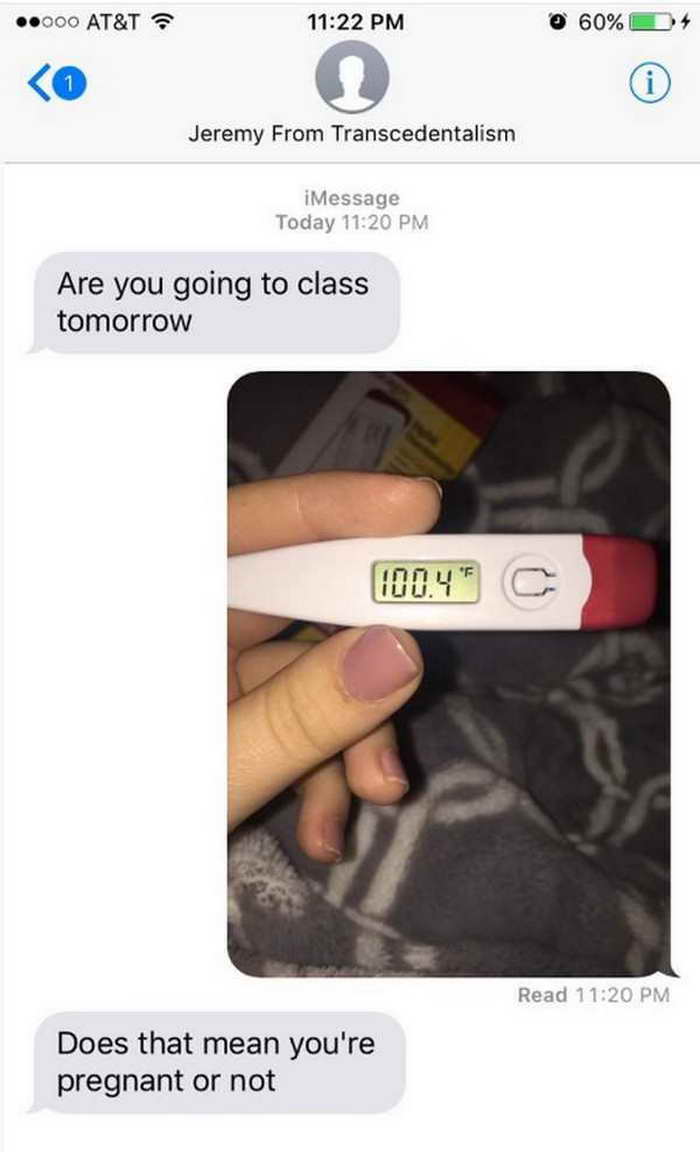 14. Here it is pretty clear that the boyfriend is busy driving, but his girlfriend wants to talk to him desperately. That is why he scares her a bit by not replying to her texts for some time. 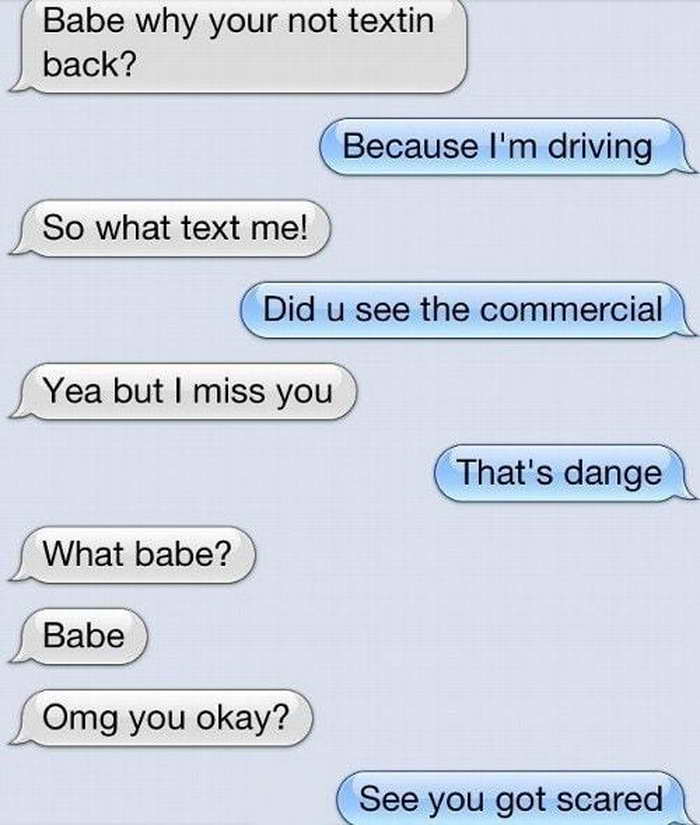 15. In this conversation, both the individuals seem to be great fans of the television series ‘Game of Thrones' so much so that they even involve a 4-year-old kid in their conversation. 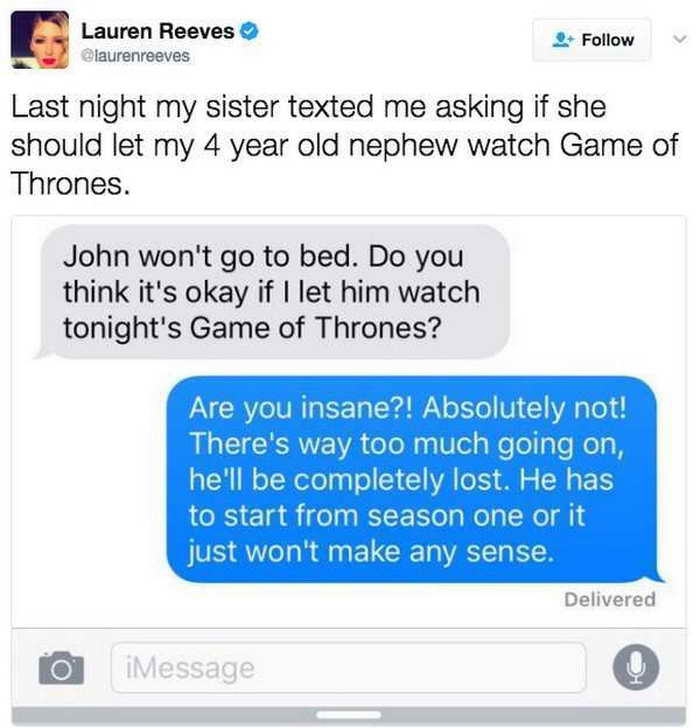 16. This is really a funny conversation between a wife and her husband where she mistakenly types the word ‘dead’ instead of ‘dear.’ 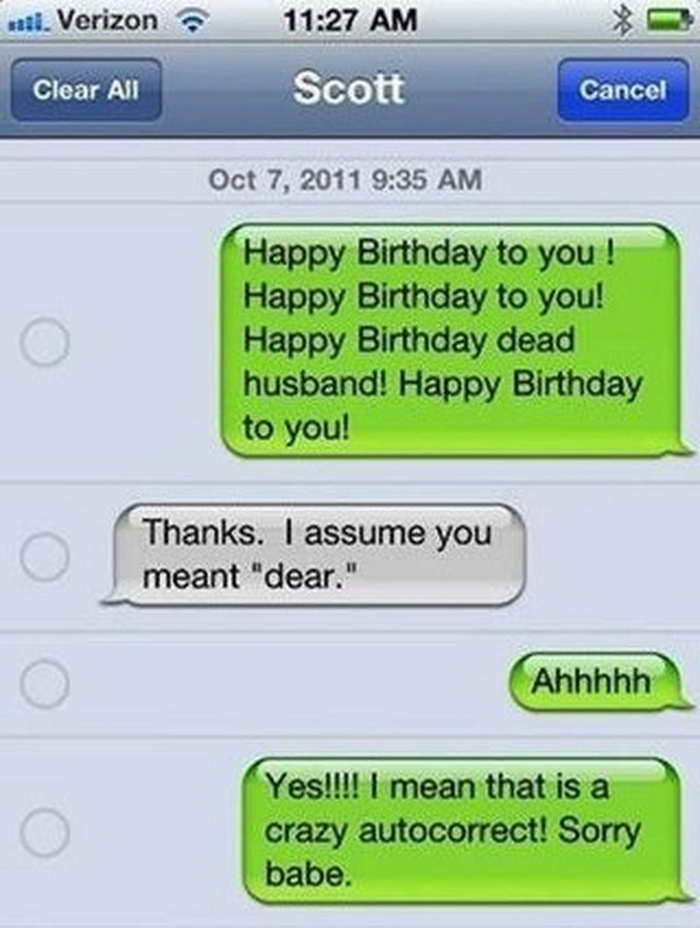 17. This is also a very funny kind of conversation, and it seems like the boy mistakenly typed the word ‘killed' instead of ‘kissed' which ultimately changed the whole scenario. 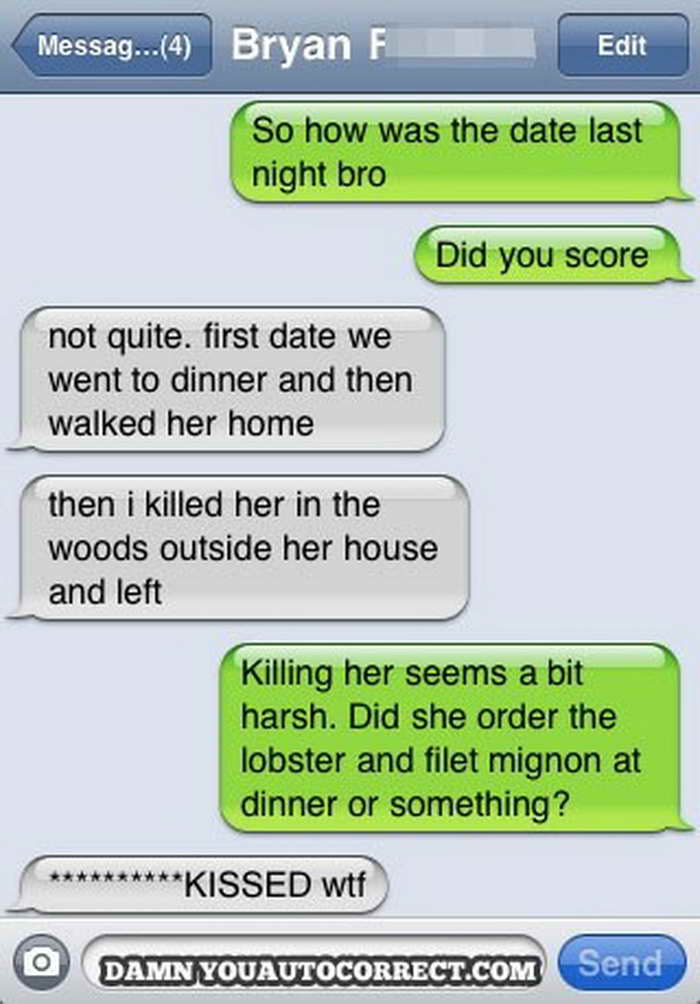 18. There is a huge difference between the words ‘shirt’ and ‘shit’ due to which the whole conversation between the couple became really funny as well as hilarious. 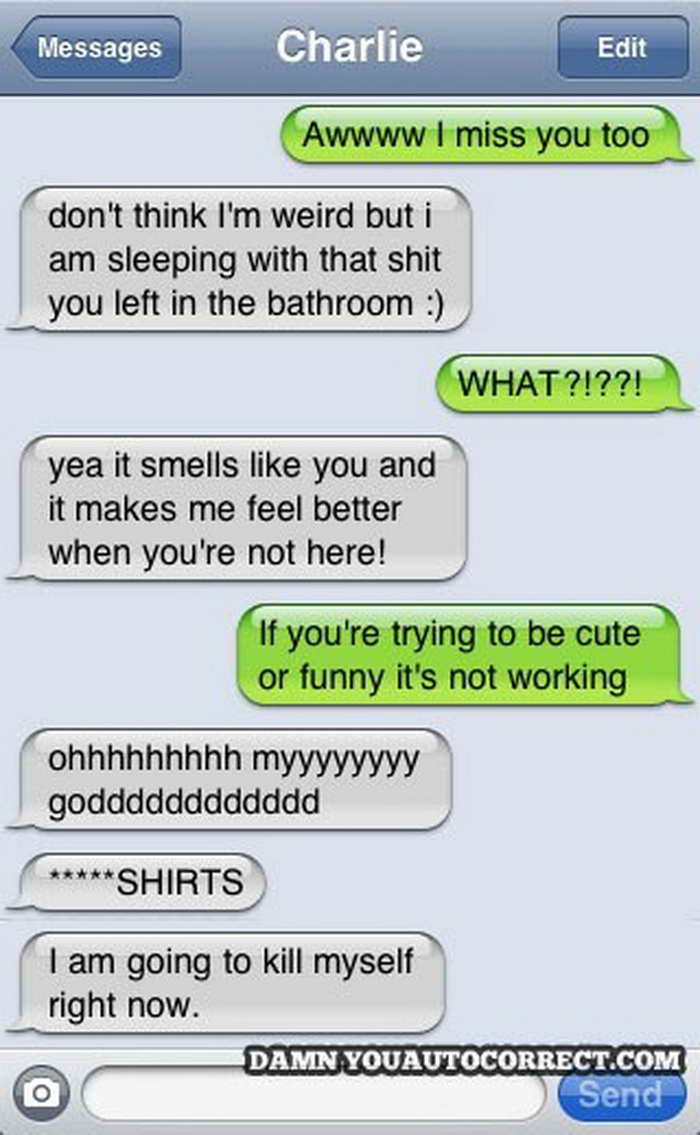 19. The girl here gets irritated with the diplomatic questions of the boy because of which she too starts giving diplomatic answers to him. 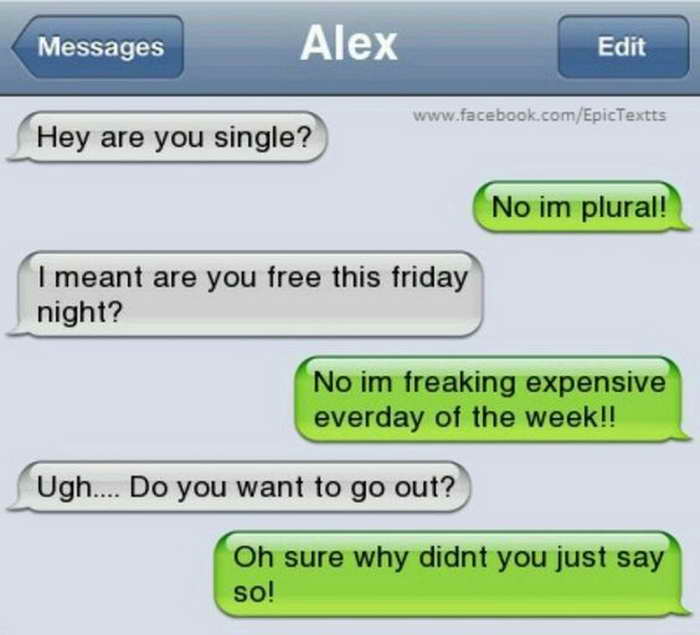 20. Text messages are the easiest medium of communication among individuals. Therefore, it is really interesting to have some fun while communicating through text messages. Funny conversations also help the individuals to remain happy in their lives.